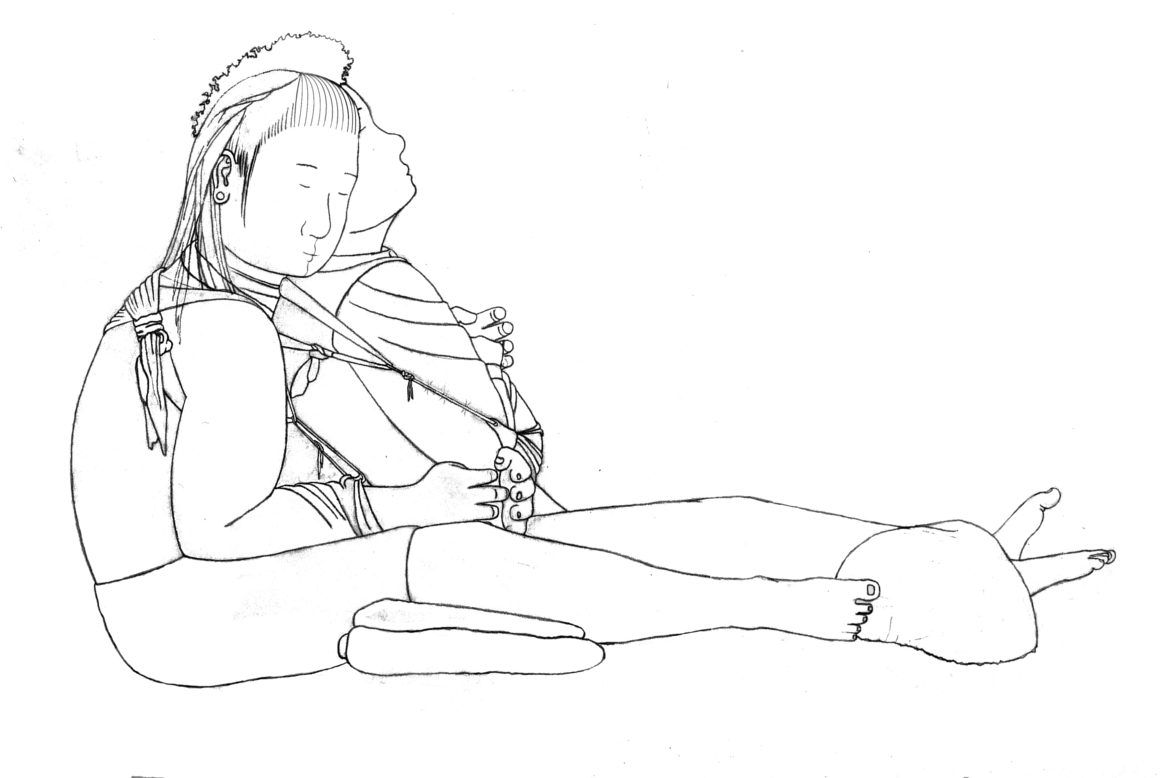 There have been times I wish I verbally told someone something in person, in exactly the way I wrote about it later, at a certain moment. At the same time, I wish I saw what the probable recipient was going through as I thought about sending a written message. Face to face, I wish I pivoted around or carved swirls into a place in a conversation at a moment when I saw the look on their face. There have been times where I let my mind wander, I make myself vulnerable, and I go into a dark path, or just a path of necessary work that is not enjoyable. But I get through it, and I know someone I care about is there listening. There are some times I can work with music. There are some times I can't listen to anything to concentrate. There have been beautiful dreams, sounds, and visions I've had that are more challenging to bring to my consciousness when I'm awake, when I still see and hear the situation I've been in and the stress that comes with it. In communicating with someone I guess I probably should not interrupt during their writing, I guess I may predict what they're going to write with a few characters written, and I know I have baggage from this forecast that could be swung around. But the time to write out the whole message may make the momentum or potential energy of my baggage subside and then settle in a place I could not have predicted, like a parachute in the wind.

**As of 5/17/2020, the author knows of about 5 minutes of practical experience with any of the following thoughts.** But it is known in protactile (PT) American Sign Language (ASL) group conversations of 3 people sitting side by side, there is a fluent ability for the person sitting in the middle to relay signs from the person on one end to the person on the other end, with signing that looks ambidextrous and nearly simultaneous. In a PTASL dialogue, there are many circumstances, with uniquely developed terms called mapping, SASS, demonstration, and tactile imagery, where drawings are made on someone's body to describe witnessed locations, appearances, pressures, textures, and things (see Protactile Priciples by aj granda & Jelica Nuccio or videos from the Deafblind Interpreting National Training & Resource Center). PTASL is now a widely known language in the DeafBlind community that's about 13 years old, although about 3 in 10 Deafblind interpreters surveyed use it (from the same institution, 2018). It is also noted in that report there are probably about 50,000 DeafBlind Americans.

Did you get here directly without the homepage? Welcome! Please try to understand these words about consent. Thank You

I. Basics and definitions

This is like the Print-on-Palm way to communicate that is *sometimes* used *with* the DeafBlind community. Eyes are closed. No words are said. Two people sit down, both facing the same direction, leaning against eachother. Let's call the person leaning forward the Director. Let's call the person leaning back the Performer. In this case, let's assume both are right handed (although this may work just as well if both are left handed). The Director draws, with only their finger tip of their right hand, letters and characters on the palm of the left hand of the Performer, creating a message. As the message is being drawn, the Performer tries to follow and replicate this message using only the fingertip of their right hand onto the Director's left palm, in a manner as close to synchronized as cognition allows.

So as the Director draws a character into the Performer's palm, 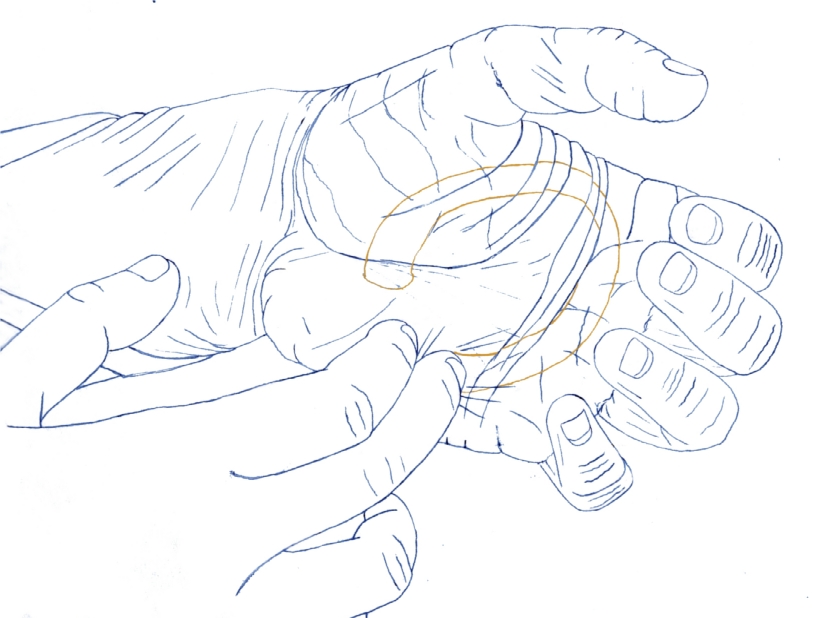 the Performer may be about 35mm behind in the drawn path: 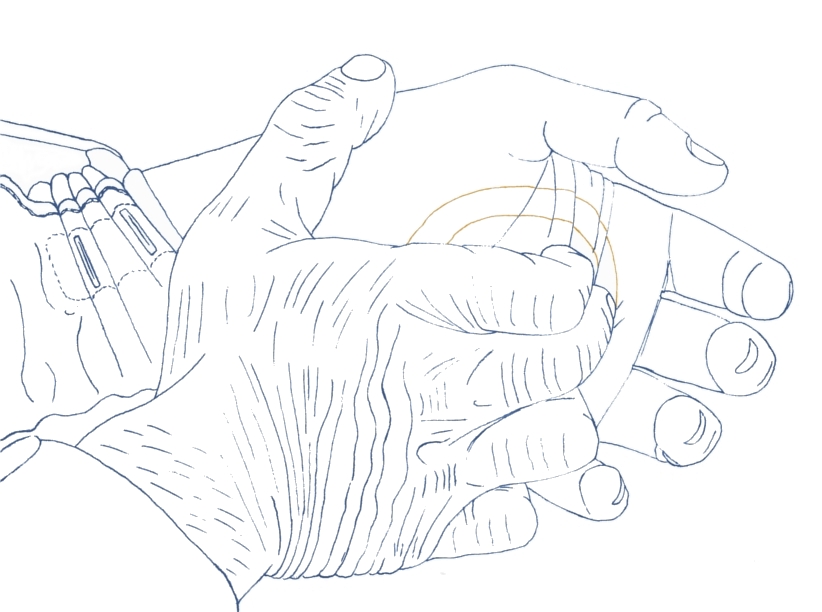 Each character may be written without losing finger contact with the palm. A break in this contact would mean the transition to a new letter or character.

Spaces between words may be an act of the broadside of all the writer's fingernails touching the palm at the same instant. 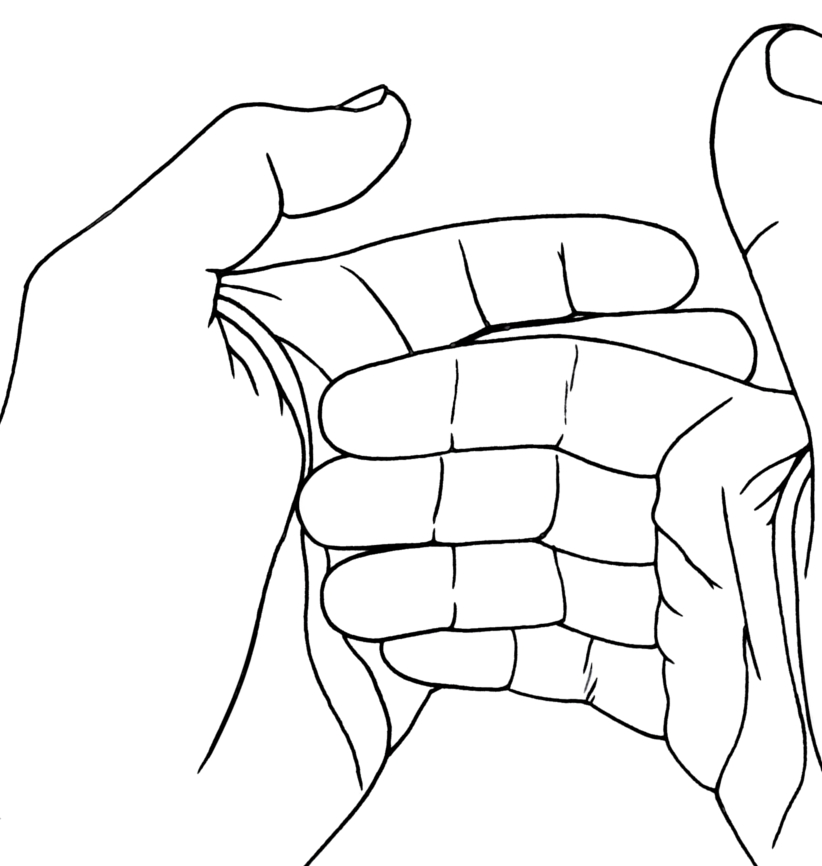 Paragraphs may be defined by like a fist bump or at the first contact points of a punch to the palm. 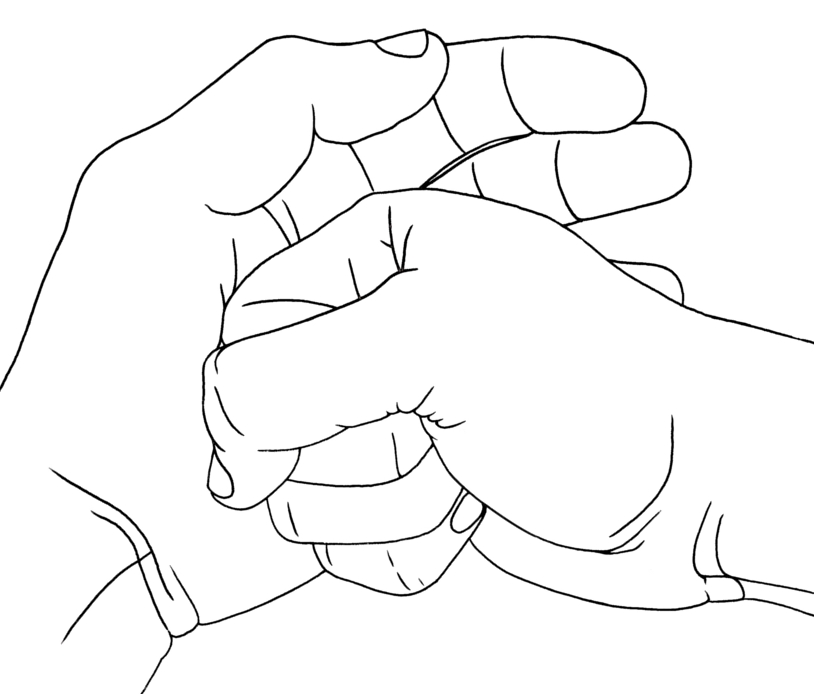 To make this mutual understanding of each character more automatic, especially when the shape of their palms are different, it may help to identify points on the palm, and the spatial relationships between these points, that are common and similar between the two people. 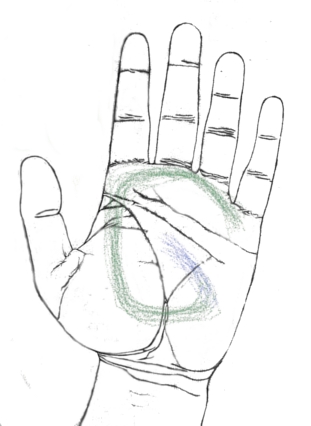 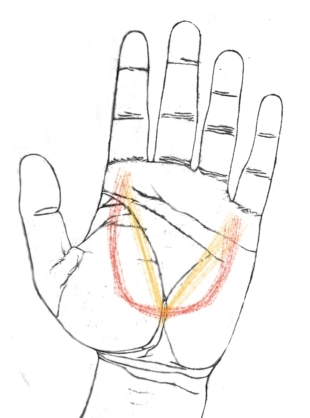 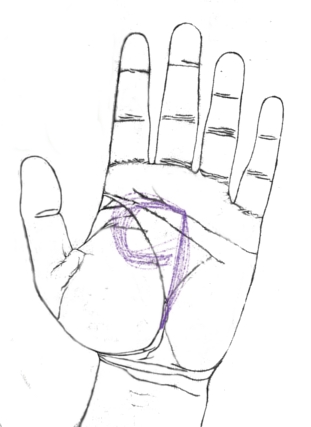 Among these points, lines making up all English letters may be guided by these parts at the font size like what's illustrated to avoid confusion or misinterpretation. Making character comprehension second nature may start with the consistency of one font, 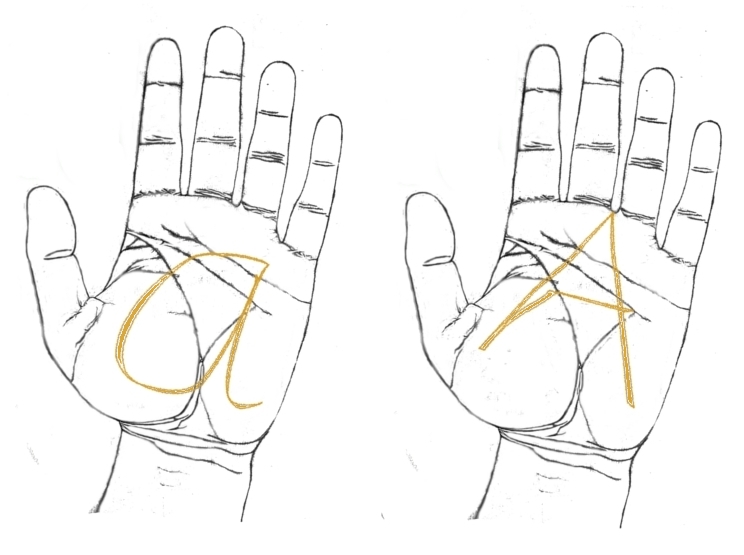 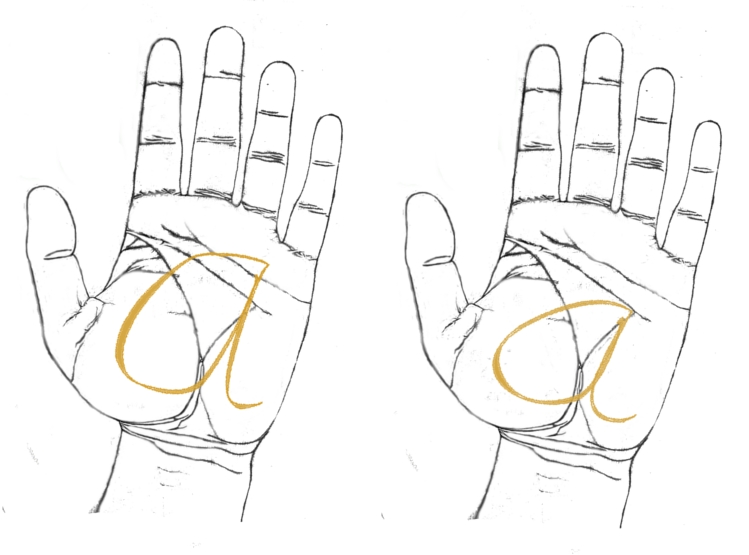 one angle, one location, 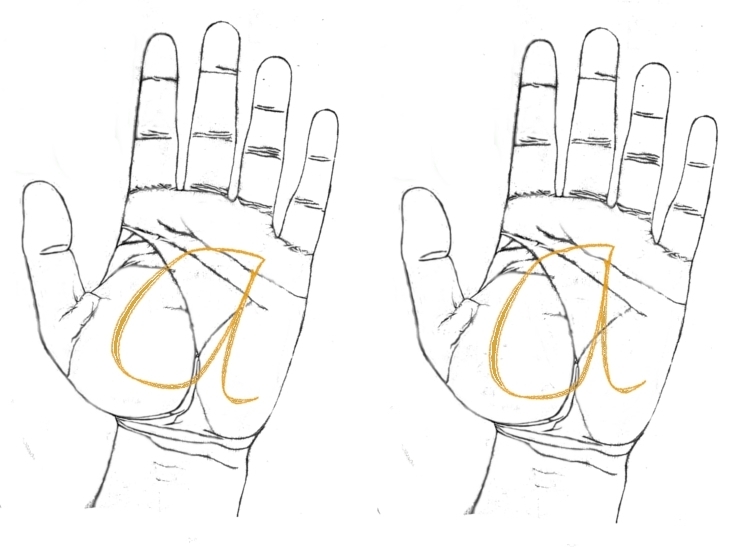 and one direction of drawing. 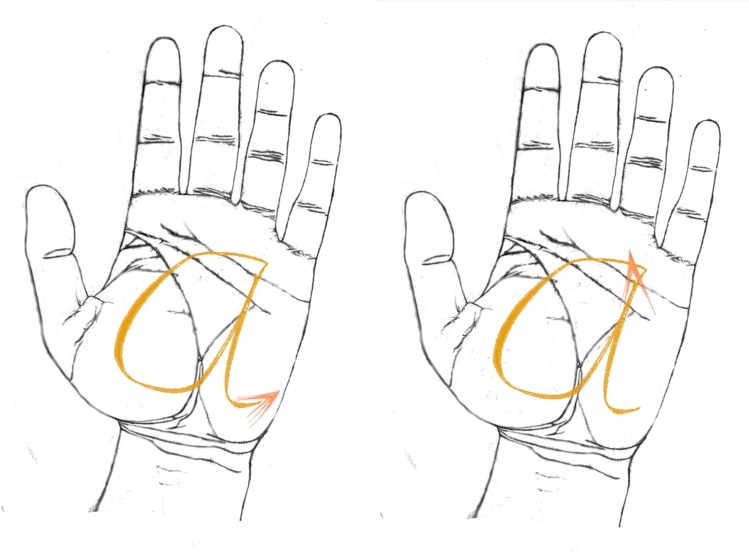 Like some who were deafblind that wore a glove with certain characters marked in certain places, one way to distinguish between charatcters and improve fluency is to start at certain points on the palm for each character and start with certain directions to draw each character.

Numbers may be communicated by horizontal fingernail tip marks at certain places, like the keypad on a phone. 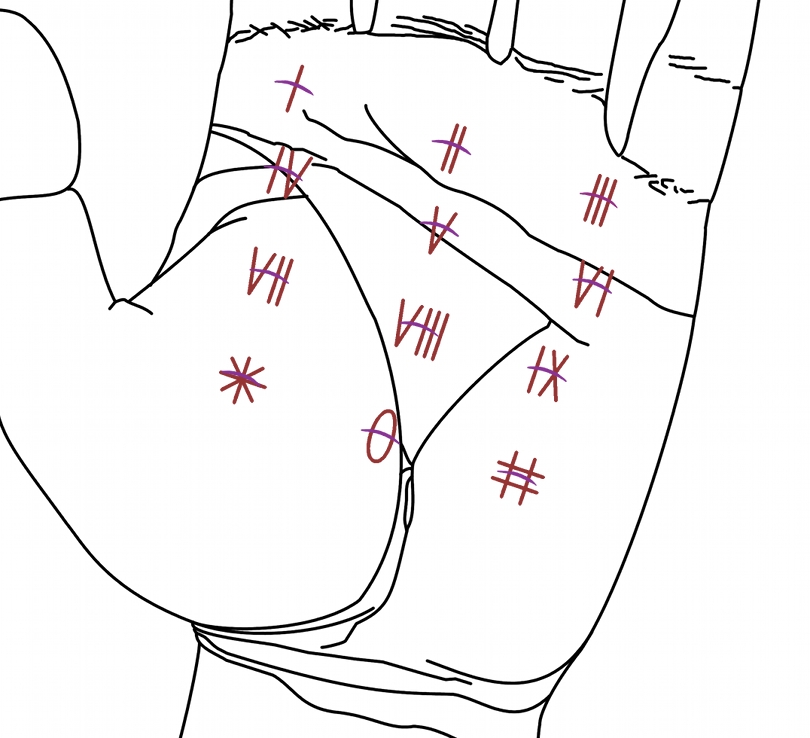 Punctuation and other symbols may be drawn with a vertical fingernail tip. The middle and ring fingernails may simutaneously make things like semicolons, quotations, and question marks. 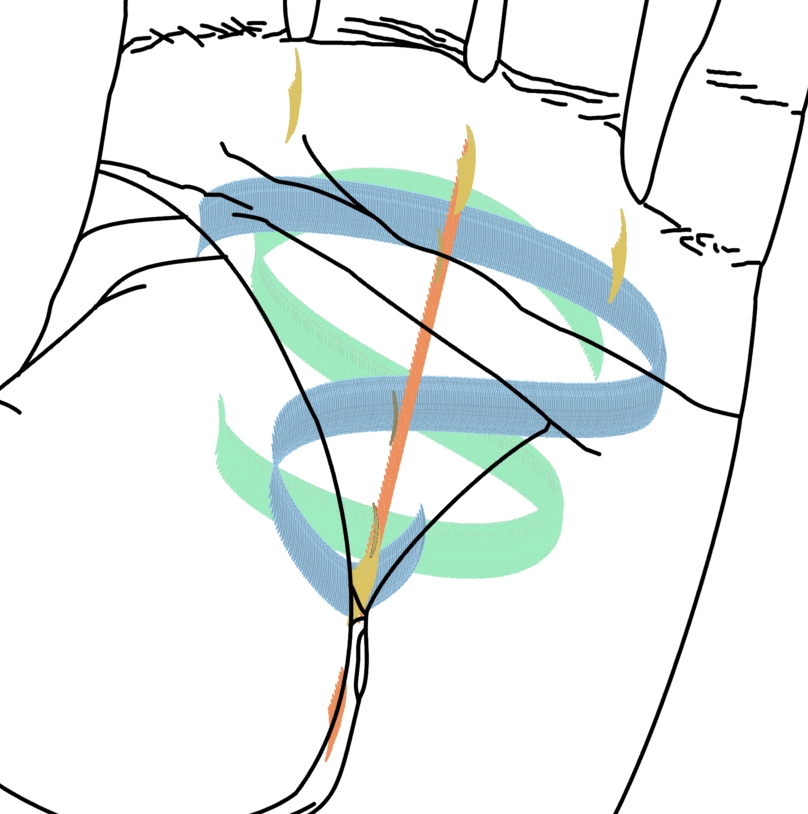 The Performer may use these commands to adjust delivery of the message: 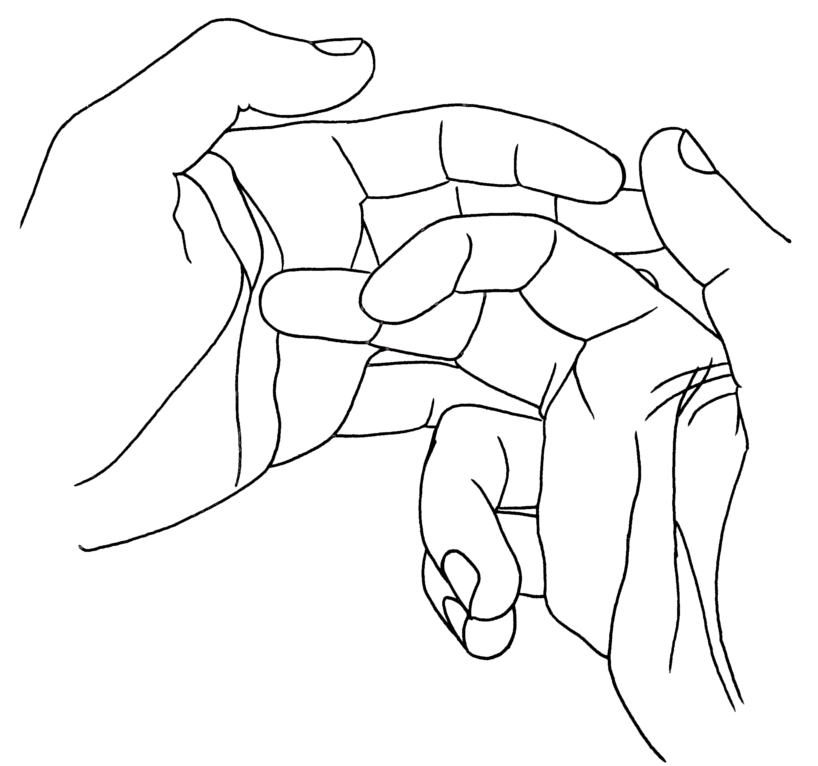 1) to repeat a word with their middle fingernail's broad surface tapped under the Director's index or middle knuckle,

2) to repeat a verse with repeated taps, 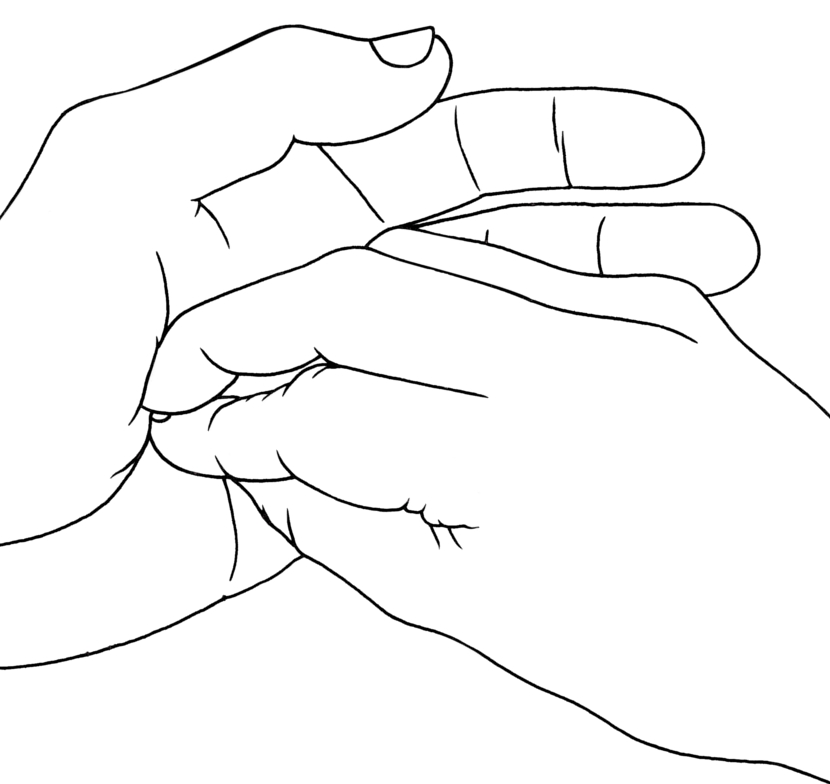 3) to switch the direction of messaging with a tap to the center of the palm with all the fingertips, so the Performer becomes the one writing an original message, and the the Director becomes the one receiving and relaying it. For now on let's call the original writer the OR and the relayer the RE, regardless of where either of them are sitting. 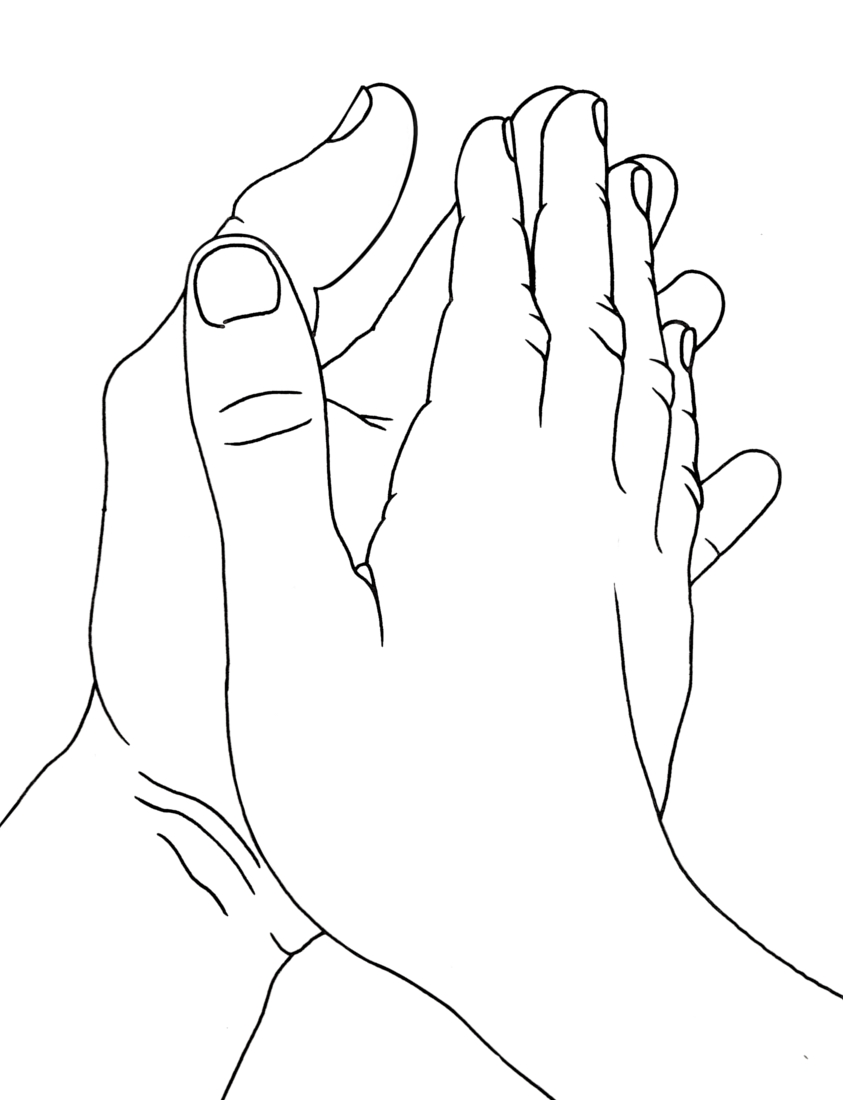 5) to resume such writing with another high five.

The speed of the message written by the OR may always be affected by the ability of the RE to keep up.