This may become at least physically uncomfortable.

The Director may accommodate different resting positions. They can take a turban, tie the ends together to make a loop, twist it once to make an "8" shape, then wear it like a vest, closely surrounding the armpits. This may be most easy to adjust and comfortable to use if the loop is tied closed with a rolling hitch.

Buttons on the cuffs of a long sleeve shirt may be replaced with velcro or sewn seams. Then two shoelace loops tied in the same way as the turban may pull each hand towards their shoulder by linking the cuffs to the turban loop ends near the armpits. Adjustment of the resting angles of the arms to the spine may happen when the arms rest on the thighs. Their feet may find a rock or two to keep them from sliding out. Their knees may rest at a certain angle with a backpack or two, a rolled up blanket, a rock, etc. The positioning of all four of these shims would adjust these resting arm angles.

The Performer may also accommodate a number of resting positions. The may have the same kind of shirt on. Their tie could become a similar loop around the armpit and shoulder of their reading hand, pulled across the upper back, over their shoulderblades. A rolling hitch could be used here too. This tie may link to a shoelace loop tied in the same way. The shoelace loop would link the cuff buttonhole, and only that end of the cuff, not the end with the button, of their reading hand. So this loop would run across the back of the writing arm. The arm of the reading hand could then hold up the arm of the writing hand if the edge of the cuff end, near the button hole, faces an counterclockwise direction (from the perspective facing the tips of straight fingers and a straight wrist) around the arm. It may be important this shirt's buttonhole at the cuff is near the pinky if the sleeve is not twisted and the Performer was to stand up with that arm relaxed. This may aid the wrists that are oriented a certain way for a prolonged period. 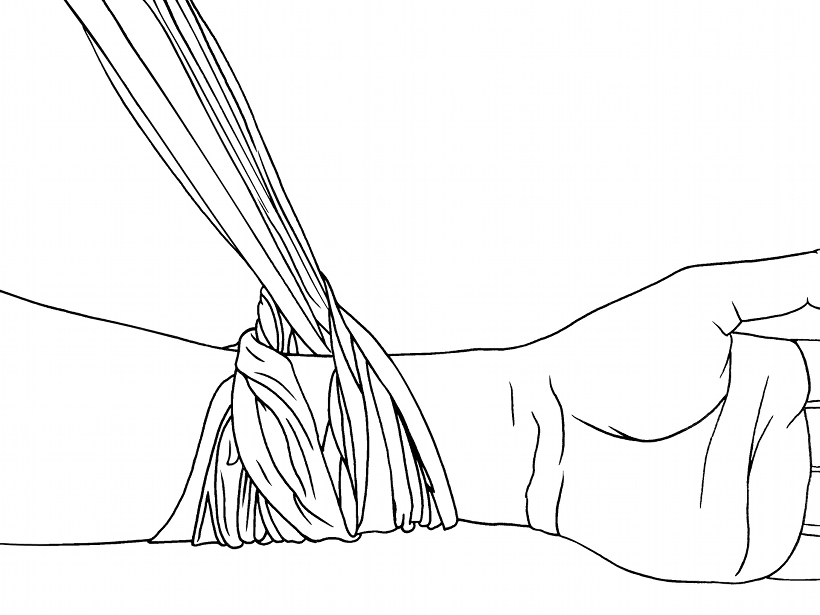 If the Director doesn't have a shirt like that, they may cut (2) 5" by 11' strips out of an old bedsheet. Each one may run through a belt guide loop under the kidneys or near the spine then make a big loop tied shut with a rolling hitch. These loops would run from the belt guides up the back to the shoulders on the opposite side of the spine, making an "X" on the back. The other ends of these loops may suspend the Director's arms with a lark's head knot. The chances these loops would interfere nerves or circulation over a prolonged period may decrease if the fabric is spread as wide as possible where the weight is beared.

If the Performer doesn't have a shirt like that, they may use a similar setup, but the belt guide loops may be closer to the shoulders and the big textile loops may run straight up the back from the belt guide loops instead of cross eachother. Their arms on the other side of their torso may be pulled over and up their body with the elbows bent at an appropriate angle by the pull of twisted t-shirts acting like arm slings. A shirt may be prepared for each arm one at a time in the same way: 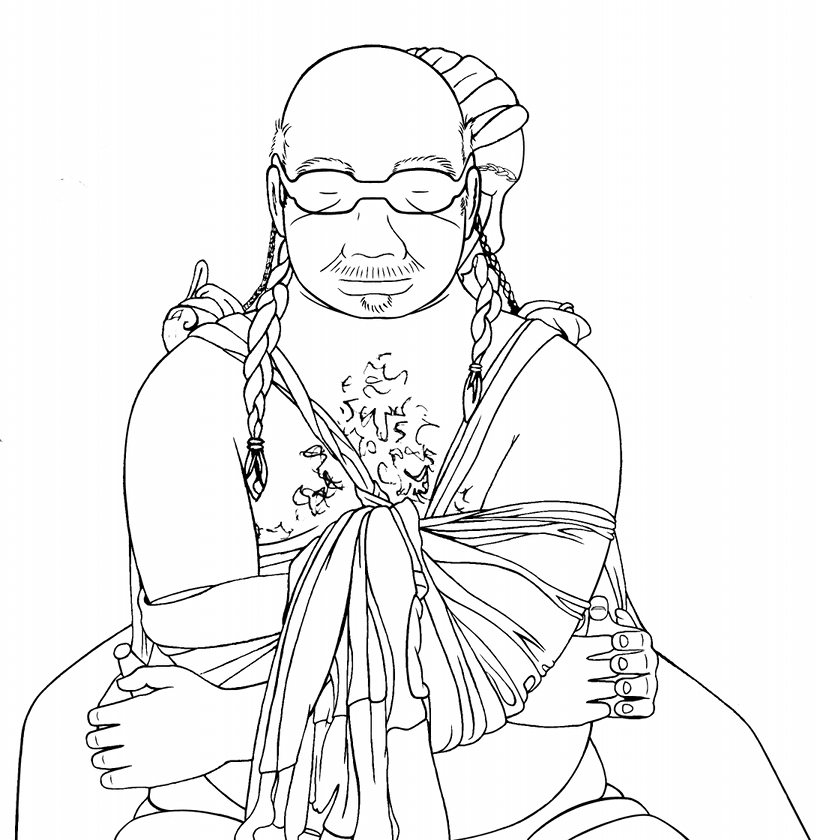 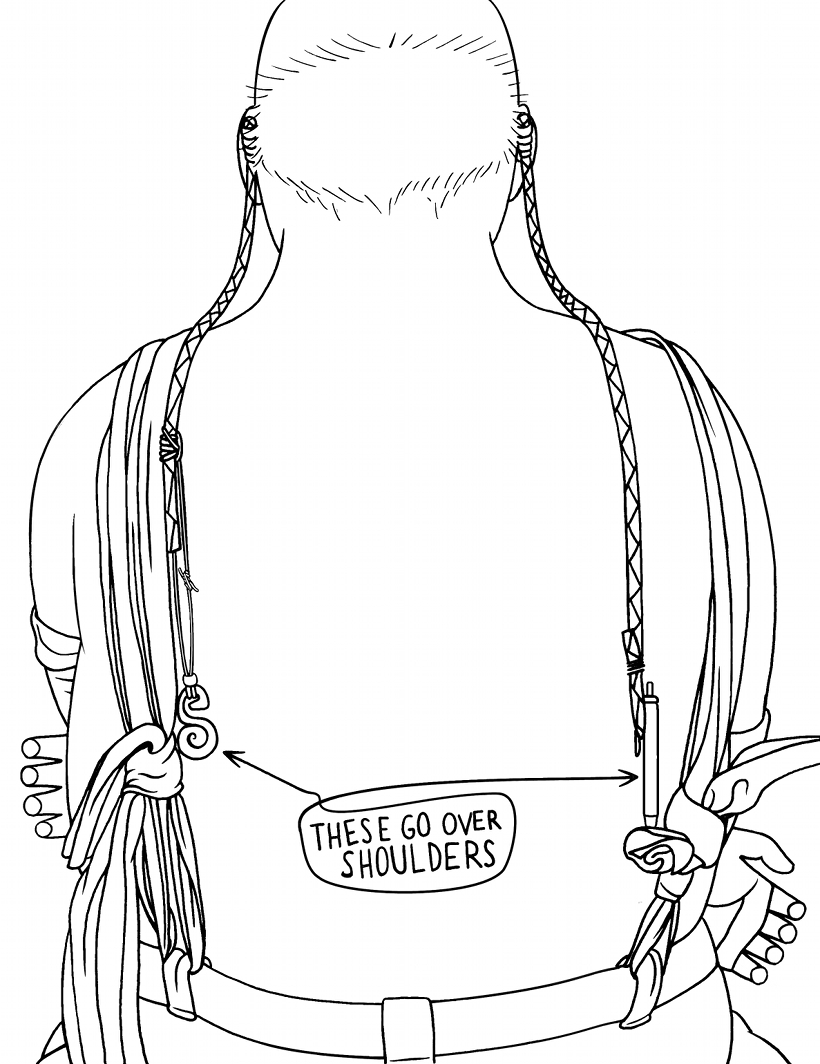 1) One of the big textile loops may run over and straight down their shoulder along their arm and chest.

2) The other end of this loop would also make a lark's head knot and then could loosely surround the end of this arm. The loop then would be placed off the side of the body while both ends are fastened to it.

3) Their opposite straight arm runs from the bottom shirt opening, through the shirt along it's inside edge, then out one sleeve hole, situating the elbow about halfway up the shirt. The whole shirt may hang from this straight arm with any text on the shirt legible from a perspective tilted 90 degrees.

4) With their elbow staying next to the same spot of fabric, the elbow may bend like 90 degrees while the whole hanging part of the shirt from the collar to the bottom edges may be pulled together and grabbed with the hand of the arm with the knot around it. With the covered elbow still bent at this angle near the same spot of fabric, this bunch would then be twisted snungly either direction and pulled away from the elbow crease at the same time with both hands, making fabric snug against the elbow tip. The pull would be in a direction at the same plane of this bent arm, with the angles away from the arm and forearm being about the same. This would make a near uniform amount of compression all along the covered part of the arm away from the side with the pulled and twisted fabric. The shirt should not be twisted so much that most of the forearm between the elbow and the wrist is bare.

5) While the twisted bunch stays taught and twisted, the lark's head knot around the arm doing this pulling would be pulled down the buch, as close to the covered elbow as possible, and sinched tight. This constriction from the knot should happen between the elbow and any big curls (like if the whole buch felt like a rope and this rope curled like a vine) that may have formed from twisting. These knots become tight here when they are torqued in the direction that pulls the peak of the loop around the bunch of shirt.

6) The whole big loop could then be pulled back on the shoulder, suspending the arm in position like a sling. The rolling hitch could then adjust where the relaxed position may be.

The harnesses and cordage should probably still be able to facilitate clear messages like backchanneling, described in the following section. The last two ways of arm suspension described may make backchanneling easier by the texture of hair or textiles felt directly against more areas of the skin, if they don't decide to wear any shirt conventionally.