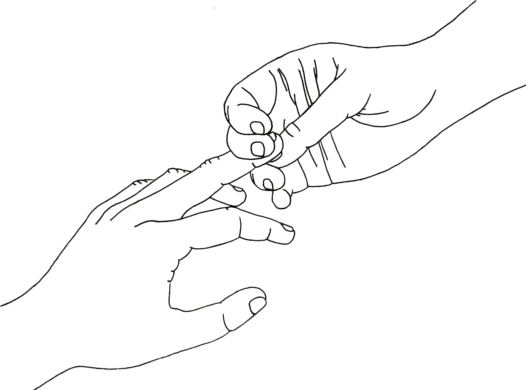 **As of 2/20/2022, the author knows 0 accounts of practical experience that would legitimize any of the thoughts described here.** But it is known in protactile (PT) American Sign Language (ASL) group conversations of 3 people sitting side by side, there is an ability for the person sitting in the middle to relay signs from the person on one end to the person on the other end, with signing that looks ambidextrous and nearly simultaneous. In a PTASL dialogue, there are many circumstances, with uniquely developed terms called mapping, SASS, demonstration, and tactile imagery, where drawings are made on someone's body to describe witnessed locations, appearances, pressures, textures, and things (see Protactile Priciples by aj granda & Jelica Nuccio or videos from the Deafblind Interpreting National Training & Resource Center). PTASL is now a widely known language in the DeafBlind community that's about 13 years old, although about 3 in 10 DeafBlind interpreters surveyed use it (from the same institution, 2018). It is also noted in that report there are probably about 50,000 DeafBlind Americans.

Did you get here directly without the homepage? Welcome! Please try to understand these words about consent. Thank You

This activity depends on the principle of tactile message to tactile message dictation in a manner that is as close to synchronized as cognition allows. If POP to POP dictation works fluently, and if the speed, pressure, and location of writing can be appropriately articulated, and be accurately relayed, how may this practice be related or applied to finger motions that don't make text, but an oral stimulation of erogenous areas?

[Figure 42: close up at angle near what could look down Performer's earhole. Penis in mouth like figure 41. Director grips hair of Performer. arrows pointing closer to back of Performer's head and closer to Director's abdomen from Director's gripping fist, along plane of Director's penis. Figure 43: same arrow directions, perspective, and positioning as Figure 42, but Performer has hair too short to grip, so Director clamps sphenoid/ethnoid plates near Performer's eyebrows to push and pull. Arrows still point from Director's hand on same plane outwards.]

[Figure 44: same perspective and positioning as Figure 42, except the Director's pinky finger applies pressure to the Performer's scalp above their ear at the Director's fingerprint. arrows pointing up and down from this point of contact.]

[Figure 47: same perspective and positioning as Figure 42, except the Director's thumbnail applies pressure to the Performer's scalp above their ear. arrows pointing up and down from this point of contact.]

Where the Performer's middle finger points, or at what angle the finger clamp is made, suggests where the stimulated penis is pointing. The range and point of reference of the degree where the Performer twists their neck may be adjusted by the Director's nonwriting hand pushing the sphenoids, as finger clamping orientation is constant.

These concepts my be used for a 69ing position as well:

[Figure 52: Director's dominant hand and Performer's reading hand in same kind of directing position, but Performer's hand makes pointing gesture with index finger and fist instead of middle finger. This is as these two are 69ing. Frame is big enough to display both sets of shoulders and elbows of communicating hands. Hammock holds Director's body on top to a certain level.]

[Figure 53: Same position and angle of perspective as Figure 52. but close up of Performer sucking Director's penis.]

[Figure 54: top view of hammock layout, with translucent body superimposed. similar to hammocks with fixed width spars on both sides, but instead of one wide sheet connecting the two spars, there are two sheets of textile that cross over eachother once like an "X". the end of each sheet is bunched and tied with large overhand knot of the same sheet. a lark's head knot of different cordage engages these knots, and the other ends of the cordage are fastened to a carabiner that may engage the fixed width spars at different widths. There may be sub figures of this superimposed to the side to display the details of the different connecting points. so the "X" of the hammock may be adjusted by how much it sags, and how narrow the "X" is, to accomodate holding up different body shapes and behaviors. The body is held up from the hips to the shoulders, and the two sheets intersect between the ribs and navel of the body.]